The Skoonka Creek property is situated between the communities of Lytton and Spences Bridge in south-central British Columbia, approximately 10 kilometres north of the Trans-Canada Highway. Prior drilling between 2005 to 2007 returned significant gold intersections from a series of epithermal gold prospects.  Two historical examples include:

Peter Fischl, Exploration Manager, comments: “Westhaven's 2022 drilling on the Skoonka Creek property will be targeting the JJ Vein Zone, one of a number of low sulphidation epithermal vein systems previously drilled by Strongbow Exploration between 2005 and 2007.  The JJ Vein Zone comprises a single east-northeast trending quartz vein system that has been traced by drilling over a 750m strike length. This year's drilling will confirm continuity of the higher-grade portion of the vein in the vicinity of the original JJ showing and step-out to the west to test the zone down-dip from the previous shallow drilling.  The JJ West target will be tested as well for the possible southwest extension of the vein zone in a down-faulted block that may have preserved the entire vein zone.  A magnetic low with coincident high-level pathfinders such as mercury and arsenic on trend with the JJ Vein Zone suggests the zone may have been preserved here at JJ-West.”

Westhaven’s initial drill program is planned to consist of 13 holes (~3,000m) targeting the JJ vein system and its possible extension at JJ-West. Drilling will include shallow infilling of the eastern JJ high grade shoot to test continuity of bonanza style gold mineralization, as well as step outs to the west that will test deeper portions of the known JJ structure, indications of a second underlying zone, and JJ West.

The JJ vein system comprises two main quartz veins (traced on surface for 175m) and situated within an alteration envelope from 4 to 20m thick. Past drilling tested the zone over a strike length of 750m, and locally to a depth of 250m. Subsequent soil sampling, rock sampling and prospecting undertaken some 900m southwest of JJ have identified anomalous pathfinder elements and quartz veining in float and outcrop in an area referred to as JJ-West.  The high-level pathfinders at JJ-West are coincident with an airborne magnetic low of similar amplitude and directly on strike from the JJ vein zone. Interpretation of these results suggest a possible continuation of the JJ vein system in a down-dropped fault block that may have preserved the upper portions of a gold-silver epithermal system.

Additional targets of potential interest on the Skoonka Creek property include well defined soil anomalies, undrilled gold/silver mineralization in outcrop, linear airborne and ground geophysical features striking parallel to the JJ vein system zone, and the potential projection of JJ eastward about 2.5km under a thin veneer of cover rocks to the as yet undrilled Bermuda zone.

On behalf of the Board of Directors

Westhaven is a gold-focused exploration company advancing the high-grade discovery on the Shovelnose project in Canada’s newest gold district, the Spences Bridge Gold Belt.  Westhaven controls 37,000 hectares (370 square kilometres) with four 100% owned gold properties spread along this underexplored belt. The Shovelnose property is situated off a major highway, near power, rail, large producing mines, and within commuting distance from the city of Merritt, which translates into low-cost exploration. Westhaven trades on the TSX Venture Exchange under the ticker symbol WHN. For further information, please call 604-681-5558 or visit Westhaven’s website at www.westhavengold.com. 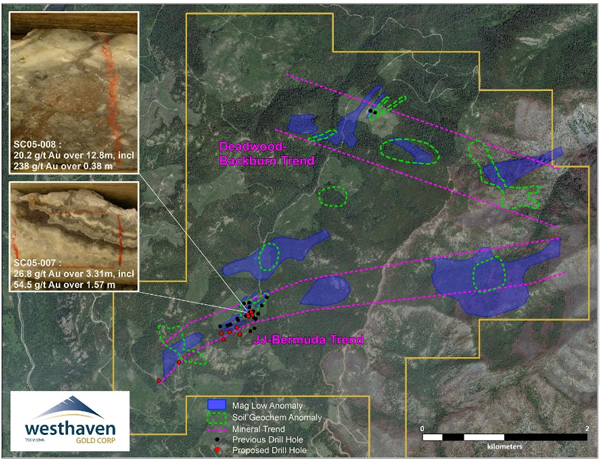