Westhaven is reporting assays for 17 holes from its ongoing drill campaign at Shovelnose. Westhaven has completed 28,400 metres of diamond drilling to date in 2021. An additional 16 holes are in the lab pending assays.

As of Friday September 3rd, the Evacuation Order issued by the Thompson-Nicola Regional District Operations Centre (EOC) in Kamloops has been downgraded to an Evacuation Alert. Field crews and drill contractors are mobilizing to site and drilling will resume shortly. Once again, special thanks to the firefighters and first responders who put their lives at risk.

Gareth Thomas, President & CEO of Westhaven Gold, states: “These recent drill results at the South Zone confirm that along with multiple high-grade gold-silver veins, there are also significant widths of disseminated gold-silver. These broad intercepts are expanding the footprint of the known area of gold-silver mineralization. Once drilling resumes, the focus will be on recent vein intercepts (SNR21-37 to SNR21-40), northwest of the South Zone where pale-grey banded quartz with adularia and ginguro were observed in the core; assays pending. We will also be focusing on the FMN Zone, approximately 2.5 kilometres northwest of the South Zone, where assays are also pending.”

Peter Fischl, Exploration Manager, comments: “Resource drilling at the South Zone has confirmed the continuity of Vein Zones 1, 2 and 3 based on previous broadly spaced drilling from 2018-2020. This drilling has also confirmed the presence of broad intervals of lower grade gold mineralization occurring between Vein Zones 1 and 2. This mineralization is also seen as a halo that can encompass all three vein zones, as seen in hole SNR21-20, which returned 0.49 g/t Au over 265m. The presence of such mineralization adds to the potential for a bulk-tonnage resource at South Zone.”

As a significant portion of the resource drilling has been completed at South Zone, the drill program is now focused on follow-up testing of stronger quartz veining seen in holes SNR21-37 to SNR21-40 in Vein Zone 1 in the northwestern portion of South Zone. Drilling will also take place northward towards the Lear target for infill and step-out drilling on Vein Zone 3. The FMN target remains a priority for follow-up drilling. Drilling will resume at FMN upon completion of the resource drilling at South Zone where the shallower portions of the mineralized horizon in Vein Zone 1 will be targeted at the 1200-1300m level. This will be following up the last hole drilled at FMN, hole SN21-175 (assays pending), which encountered quartz-adularia (+/- ginguro) veins contained in three subintervals of Vein Zone 1 spanning 246m downhole. Several CSAMT targets lying west of South Zone will be tested this fall as well.

Core samples were prepared using the PREP-31 package in ALS’s Kamloops facility. Each core sample is crushed to better than 70 % passing a 2 mm (Tyler 9 mesh, US Std. No.10) screen. A split of 250 g is taken and pulverized to better than 85 % passing a 75-micron (Tyler 200 mesh, US Std. No. 200) screen. 0.75g of this pulverized split is digested by Four Acid and analyzed via ICP-MS (method code ME-MS61m (+Hg)), which reports a 49-element suite of elements. All samples are analyzed by Fire Assay with an AES finish, method code Au-ICP21 (30g sample size). Additional Au screening is performed using ALS’s Au-SCR24 method, select samples are dry screened to 100 microns. A duplicate 50g fire assay is conducted on the undersized fraction as well as an assay on the entire oversize fraction. Total Au content, individual assays and weight fractions are reported. All analytical and assay procedures are conducted in ALS’s North Vancouver facility. A QA/QC program included laboratory and field standards inserted every 25 samples. At least one field blank is inserted in every batch of 25 samples, with additional blanks inserted following samples with visible gold.

Westhaven’s ongoing Quality Assurance and Quality Control programs include auditing of all exploration data. Any significant changes will be reported when available.

Westhaven is a gold-focused exploration company advancing the high-grade discovery on the Shovelnose project in Canada’s newest gold district, the Spences Bridge Gold Belt. Westhaven controls 37,000 hectares (370 square kilometres) with four 100% owned gold properties spread along this underexplored belt. The Shovelnose property is situated off a major highway, near power, rail, large producing mines, and within commuting distance from the city of Merritt, which translates into low-cost exploration.

Westhaven trades on the TSX Venture Exchange under the ticker symbol WHN. For further information, please call 604-681-5558 or visit Westhaven’s website at www.westhavengold.com. 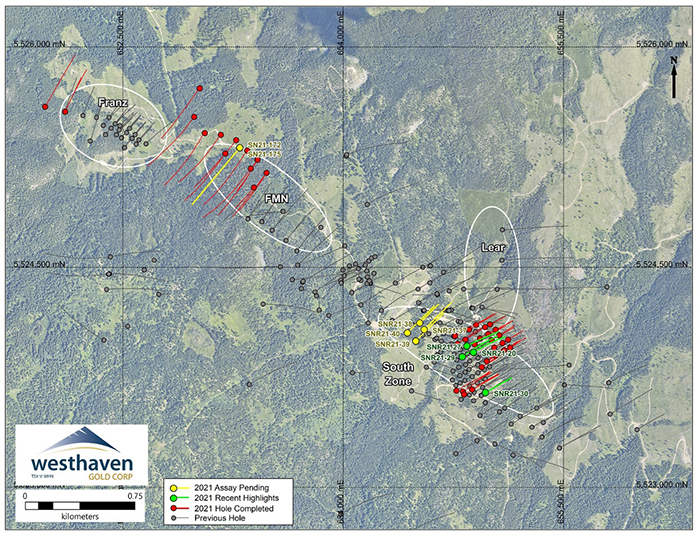 INTERVALS WITH OVER 100 AU G-M 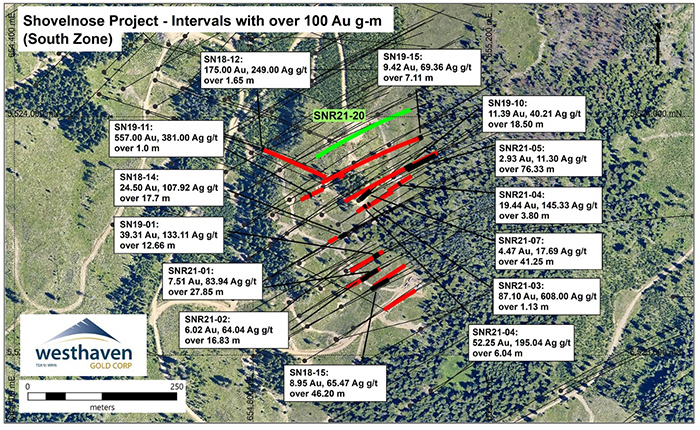 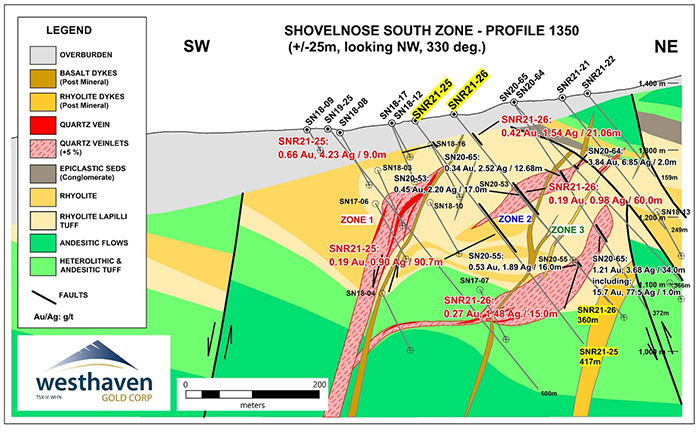 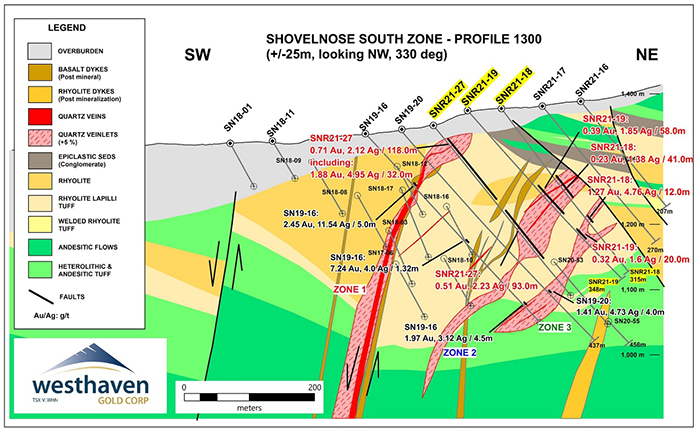 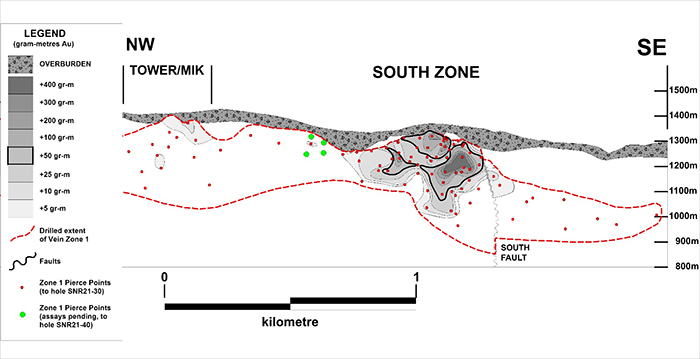