The Company completed 12 of approximately 60 planned drill holes for a total of 5,777 metres this winter drill program at Shovelnose.

Highlights of the winter program include:

Gareth Thomas, President and CEO of Westhaven, stated: “The 2020 winter drill program hit high-grade gold-silver mineralization on a new target outside of the South Zone. The drill intercepts in the Lear Zone (formerly the North Extension) increase the strike length of the second and third vein zones. Prior drilling to the west/northwest of the Lear Zone, including the Alpine Zone, has demonstrated a significant gold endowment (SN16-02 which intersected 0.50 metres of 16.70 g/t gold, and SN16-07 which intersected 123.00 metres of 0.23 g/t gold). We have yet to identify the source of this gold but upon resumption of drilling we will immediately follow-up on the Lear Zone discovery, as well as drill test many additional high-priority exploration targets across this largely unexplored property.” Thomas goes on to add, “Westhaven continues to prioritize safety and can report that we have no cases of the COVID-19 virus to date. We continue to closely monitor the situation and have implemented virus related safety protocols. We are currently preparing to resume the fully financed drilling activities in mid-May.”

Peter Fischl, Exploration Manager, stated: “Drilling resumed on Shovelnose in early 2020 with the testing of various geophysical targets proximal to the South Zone. This work was successful in discovering mineralized strike extensions for two zones of quartz veining previously drilled at South Zone.  Vein Zones 2 and 3 have been extended to the northwest, towards the Alpine Zone, a previously defined geophysical target. Gold mineralization is strongest in the shallower portions of the two vein zones at the northwestern limit of drilling.  Both zones remain open to the northwest and will be tested further along strike.  This high-priority target will be the initial focus when drilling resumes later this Spring.”

Three holes (SN20-52, 54,61) totaling 1,300m were drilled along a north-northwest trending magnetic low and coincident resistivity high on three sections spaced 200m apart over a total strike length of 400m. The area tested is centered on a 200m long north-northwest trending ridge of resistant rhyolite tuff. Mapping here in 2019 uncovered localized veining and brecciation healed by dark chalcedony.  Drilling encountered localized silica-healed hydrothermal breccias and localized quartz veinlet zones in rhyolite, before bottoming in a stock of monzo-diorite to syeno-diorite. The intrusion appears to core the resistivity high indicated on resistivity profiles.  Veining/brecciation in drill core and on surface may be related to the emplacement of this intrusive body. The nature of this veining/brecciation here may be due to the proximity of the intrusive, which may be the heat source for the more distal South Zone to the northwest. The higher temperature environment proximal to the intrusion may preclude the formation of gold-bearing epithermal mineralization, however this knowledge serves as a guide towards targets more distal to this potential heat source.

One-hole totaling 639m was drilled within South Zone at the Jessica target. Hole SN20-60 tested the shallower portions of a coincident linear magnetic low–resistivity high that suggested the presence of a possible splay extending due south, off Vein Zone 1. This hole continued to greater depths below hole SN19-22 to test the nature of veining down-dip from that encountered in hole SN19-22. A broad 150m wide zone of quartz/chalcedony +/- adularia/kspar veining was intersected in rhyolitic tuff and underlying andesite. The presence of silver and base metal sulphides (chalcopyrite) indicates a deeper level and composition of mineralization here.

*Based on the geology of the vein zones with steep dips to the west, true widths are estimated to be about 80-90% of reported interval lengths. Please see the plan map below.

Core samples were prepared using the PREP-31 package in ALS’s Kamloops facility each core sample is crushed to better than 70 % passing a 2 mm (Tyler 9 mesh, US Std. No.10) screen. A split of 250 g is taken and pulverized to better than 85 % passing a 75 micron (Tyler 200 mesh, US Std. No. 200) screen. 0.75g of this pulverized split is digested by Four Acid and analyzed via ICP-MS (method code ME-MS61m (+Hg)), which reports a 49-element suite of elements. All samples are analyzed by Fire Assay with an AES finish, method code Au-ICP21 (30g sample size). Additional Au screening is performed using ALS’s Au-SCR24 method, select samples are dry screened to 100 micron. A duplicate 50g fire assay is conducted on the undersized fraction as well as an assay on the entire oversize fraction. Total Au content, individual assays and weight fractions are reported. All analytical and assay procedures are conducted in ALS’s North Vancouver facility. A QA/QC program included laboratory and field standards inserted every 25 samples. At least one field blank is inserted in every batch of 25 samples, with additional blanks inserted following samples with visible gold. 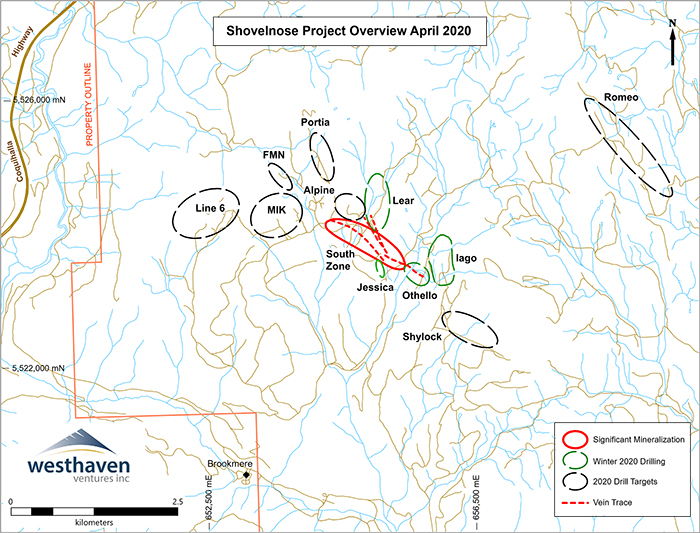 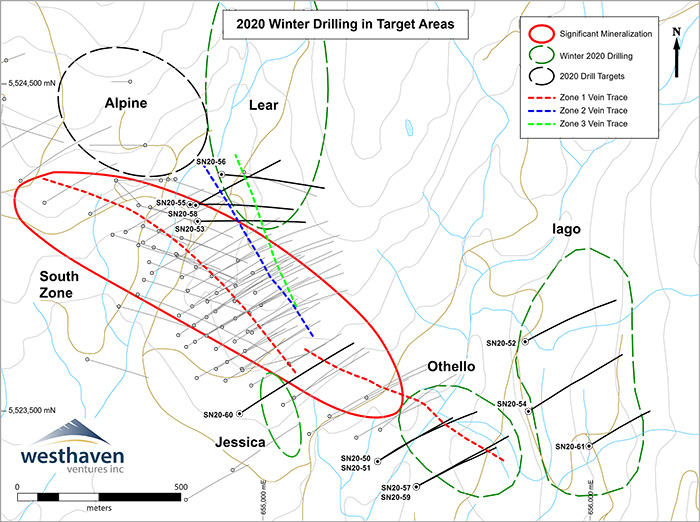 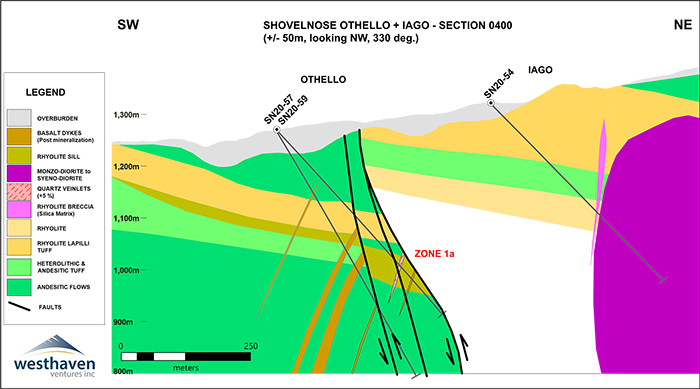 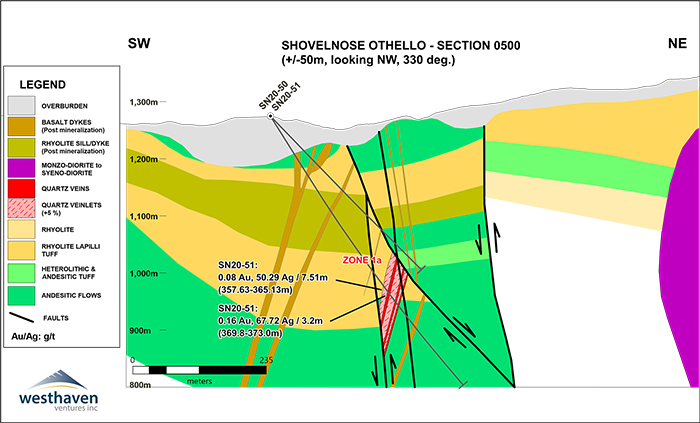 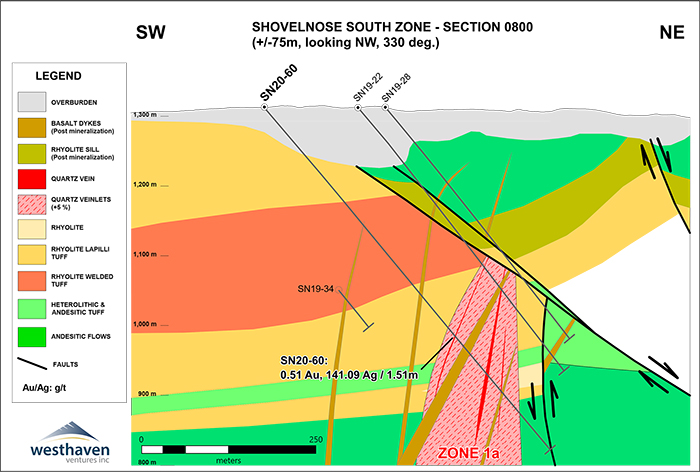 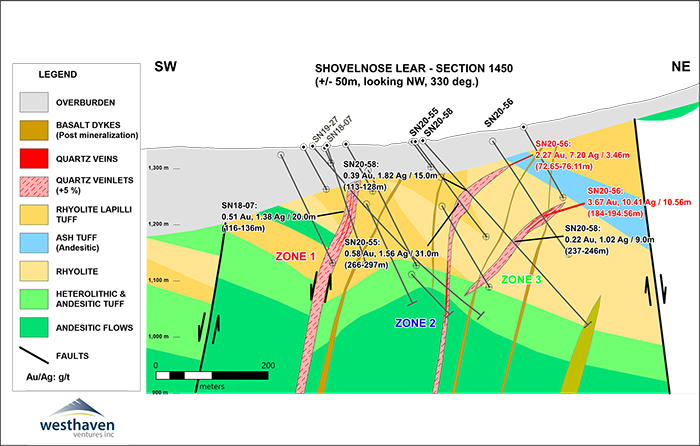 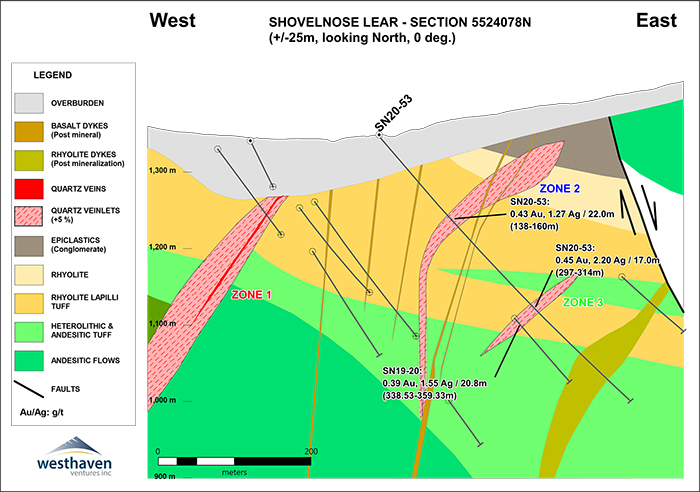 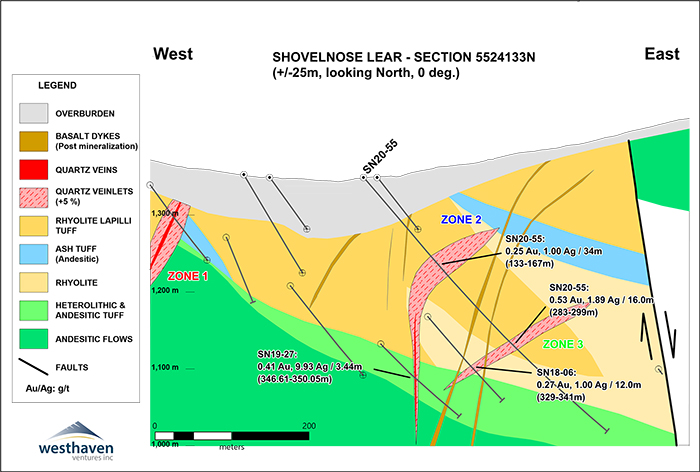 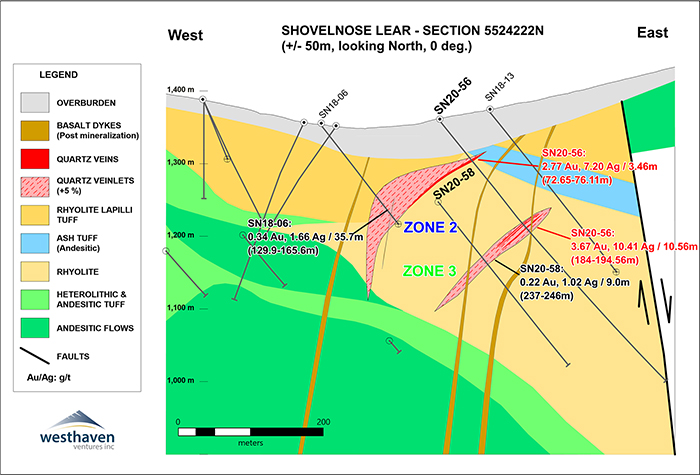