In addition to the claim staking, Sable has also formed a strategic alliance with Westhaven Ventures Inc ("Westhaven") (TSXV: WHN). Westhaven recently released high grade intersects at their Shovelnose project (October 2nd, 2018) intersecting 1.65 metres of 175 g/t Gold and 249 g/t Silver and recognition of visible gold in 5 drill holes. The Alliance brings together Sables and Westhaven’s technical expertise and combined control of 86% of the Gold Belt (225,000ha). In accordance with an existing Confidentiality and Non-Disclosure Agreement between the two companies, any ground staked by Sable within 5-kilometre of Westhaven's existing projects will be subject to a 2.5% NSR. In addition Westhaven has a 30 day Right of First Refusal (ROFR) for a three-year period for any properties within this 5-kilometre radius.

"Representing one of the largest single staking exercises in British Colombia, the acquisition of Spences Bridge is directly in line with our ongoing Upper Level Epithermal Strategy, acquiring ground and projects in world class jurisdictions in prospective terranes we believed to be underexplored." Commented Terry Harbort, Vice President of Corporate Development for Sable. "We have been monitoring the SBGB for some time waiting for the right moment to implement our strategy. Our alliance with Westhaven now gives us combined control of the vast majority of this highly prospective gold belt. As the Mexico Regional program moves in to Phase II (detailed sampling and mapping) and the San Juan Regional Program (Argentina) moves into Phase III (Drilling) the Spences Bridge Regional Program will rebuild our Phase I pipeline, ensuring that Sable Shareholders have a robust exploration project portfolio for the foreseeable future."

"We are very pleased to be partnering with Sable’s successful and experienced technical team," stated Gareth Thomas, President & CEO of Westhaven. "We believe our recent results and operational experience in the SBGB combined with Sable's epithermal and greenfields knowledge forms a strong alliance mutually beneficial to both companies."

Westhaven owns a 100%-interest in 4 properties covering over 35,000 hectares within the prospective SBGB, which is situated within a geological setting like those which host other significant epithermal gold-silver systems. It is close to major transportation routes and infrastructure allowing for cost-effective exploration. The SBGB is a 110-kilometre northwest-trending belt of intermediate to felsic volcanic rocks dominated by the Cretaceous Spences Bridge Group. 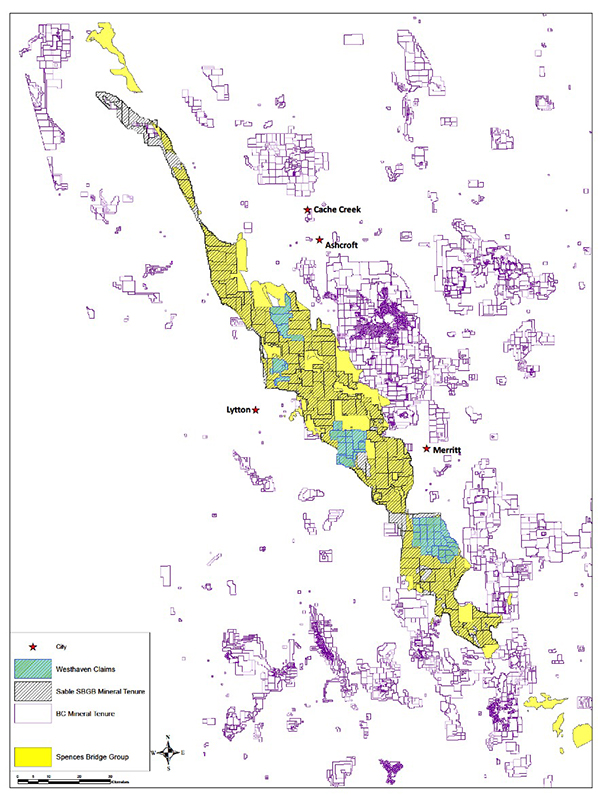