Westhaven completed 2,639 metres of diamond drilling in 7 holes. All pending assays from holes SN18-04 to SN18-07 will be reported when received in approximately 3-4 weeks. Westhaven’s management and insiders have opted not to receive any further assays until all the remaining drill core samples have been processed.

Drill hole SN18-04 was drilled as an undercut to SN17-06. It confirmed down dip continuity of two  zones of mineralized quartz veins encountered in SN17-06 and SN18-03. Drill hole SN18-05 was drilled an undercut to SN17-07.  This hole encountered a quartz veinlet zone in potassic altered tuff that may correlate with a mineralized intercept in SN17-07 (4m of 3.2 g/t Au).

Drill hole SN18-06 was drilled as a 100m step out northeast of SN17-07. This hole encountered commonly sulphidic centimetre-scale quartz veins and dark chalcedony healed breccia veins up to a metre wide, confirming continuity to the northeast. The South Zone remains open to the northeast. Drill hole SN18-07 was drilled between holes SN17-06 and SN17-07 but at a steeper angle to test for continuity and down-dip extent of the targeted vein zone. This hole encountered metre-scale quartz veins and quartz breccia veins, similar to that encountered in holes SN17-06 and SN18-03, confirming continuity of the vein zone along strike. Please see below for a plan map of the 2018 spring drilling campaign.

Westhaven has received proceeds of $104,827 related to the exercise of warrants. The warrants were exercisable at $0.08 and $0.16. As of the date of this news release, the Company now has 65,720,308 common shares issued and outstanding.

Westhaven owns a 100%-interest in over 35,000 hectares within the prospective SBGB, which is situated within a geological setting similar to those which host other significant epithermal gold-silver systems. It is close to existing transportation and infrastructure allowing for cost-effective exploration. The SBGB is a 110-kilometre northwest-trending belt of intermediate to felsic volcanic rocks dominated by the Cretaceous Spences Bridge Group. Westhaven has been working on the SBGB since 2011 and believes these relatively underexplored volcanic rocks are highly prospective for epithermal style gold mineralization.

Westhaven Ventures Inc. is a Canadian based exploration company focused on the acquisition and exploration of prospective resource properties. Westhaven is focused on advancing its Shovelnose, Prospect Valley, Skoonka and Skoonka North gold projects in British Columbia. Westhaven trades on the TSX Venture Exchange under the ticker symbol WHN. For further information, please call 604-681-5558 or visit Westhaven’s website at www.westhavenventures.com 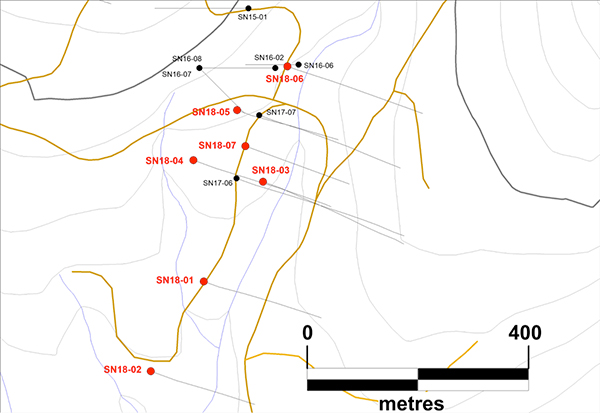