Gren Thomas, President & CEO of Westhaven stated, “The newly discovered Alpine South zone is approximately 1,000 metres in potential strike and is open to the northeast and southwest where the ground magnetic survey ended in June of 2017.  This is the most significant discovery made to date at Shovelnose and we are keen to get back there as soon as practicable.  We will be starting a ground magnetic survey shortly to see the potential size of this interpreted structure, and then we will look to start a winter drill program. The property borders the Coquihalla Highway and is only 35 kilometres from the city of the Merritt, allowing for low cost, year-round exploration.”

It is management’s belief that these newly identified gold mineralized structures in the Alpine South Zone are likely the feeder zones responsible for the gold mineralization found near surface in the Alpine Zone.  This quartz vein system remains open along strike to the northeast and southwest.  The broader zone of gold mineralization and associated metre-scale quartz veins (to 4.3m width) remains open to the southwest.  This target is just the southernmost extent of drill testing along the 1,000 metre long north-south trending Alpine Zone, which has had only limited shallow drilling to date.  Please see map below for a plan map of the drilling.

Drill Hole 16-09, the southernmost hole drilled at the Alpine zone in 2016, was drilled to the southeast, proximal to and towards the newly discovered Alpine South vein zone.  Clay mineralogy samples collected from this hole analyzed by TerraSpec (SWIR) returned the highest paleo-temperatures of all holes to date at Shovelnose, suggesting that Alpine South Zone is a major zone of up-flow of hydrothermal fluids and likely represents a significant feeder zone at Alpine to be followed up with additional drilling.  2017 drill core samples have been submitted for SWIR analysis to further assist in drill target delineation.

Thomas goes on to say, “This new discovery comes after ten years of persistent exploration for the source to a number of epithermal showings and a gold bearing silica cap.  This is a large geophysical and topographical feature previously untested and contains considerable widths of auriferous veining which could be a feeder for the previously found gold showings. This discovery marks an important milestone in understanding the property geology and should lead to considerable future exploration.”

At the Tower Zone, five drill holes targeted potential deep-seated feeder zones at depths in excess of 500 metres in an effort to account for near surface gold mineralization intersected by previous drilling.  Four discrete quartz vein systems were intersected, and a broad interval of high level disseminated gold mineralization was encountered in silicified tuff in hole SN17-02 returning 60m of 0.23 g/t Au, while a deeper feeder zone intersection of quartz-adularia breccia in hole SN17-01 returned 29m of 0.18 g/t Au.

The main focus of the upcoming drill program will be to follow up on the newly discovered gold-bearing vein system at the Alpine Zone to determine the strike extent and grade potential of the precious metal horizon.  This program will be focused on testing the known 1,000 metre strike length of the magnetic lows. The targeted magnetic lows were defined in a ground magnetic survey completed earlier in 2017 and remain open to the south.  A ground magnetic survey has begun to test the continuation of the targeted magnetic lows to the south.

Westhaven owns a 100%-interest in over 32,000 hectares within the prospective SBGB, which is situated within a geological setting similar to those which host other significant epithermal gold-silver systems. It is close to existing transportation and infrastructure allowing for cost-effective exploration. The SBGB is a 110-kilometre northwest-trending belt of intermediate to felsic volcanic rocks dominated by the Cretaceous Spences Bridge group. Westhaven has been working on the SBGB since 2011 and believes these relatively underexplored volcanic rocks are highly prospective for epithermal style gold mineralization.

Westhaven Ventures Inc. is a Canadian based exploration company focused on the acquisition and exploration of prospective resource properties. Westhaven is focused on advancing its Shovelnose, Prospect Valley and Skoonka gold projects in British Columbia. Westhaven trades on the TSX Venture Exchange under the ticker symbol WHN. For further information, please call 604-681-5558 or visit Westhaven’s website at www.westhavenventures.com 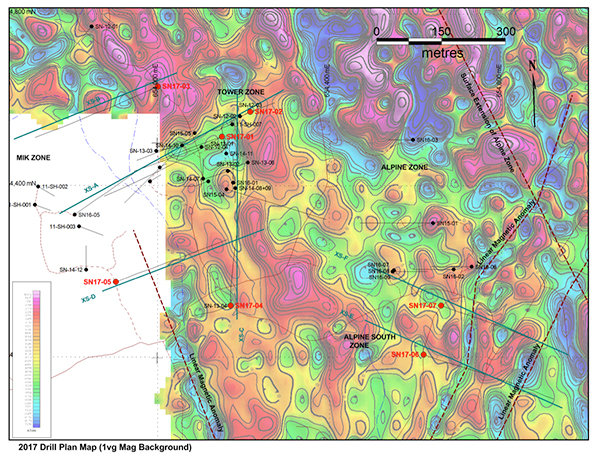